Gjirokastra is already known as a culture heritage destination. Being a UNESCO site, it is the most visited town in Albania for  many decades. But Gjirokastra has much more to see and visit. We decided to travel in villages of Bureto Mountain, amid beautiful nature and spectacular view of Drino Valley.

We started our tour from Gjirokastra to the national road to Kakavija, and turned into Libohova municipality. Our first direction was to Suha, to reach the ‘Labova of the Cross’, a beautiful village with a very unique Church which more important than the village itself. That is why the village took the name of the Church, “Labova of the Cross”.

The real name of the Church is St Mary, but the residents which have the merit of preserving this church to nowadays, prefer to call it Labova of the Cross, because of the golden Cross it has for centuries as a gift from Emperor Justinian. This church has a story. It was built by Justinian in 554, as a reward for a brave man from this village Kostandin Laboviti. A golden Cross, with a wooden piece inside from the original Cross of Jesus Christ, was the most precious thing of this Church. In fact it was, because it was stolen during the turmoil of 1990 in Albania. The locals managed to save it for many centuries, even during communist regime, but couldn’t dot it during the most turbulent time in Albania. The church has original decoration on the walls and is lately restored by Ministry of Culture.  Its pity that the information in foreign language for this church is missing into the place. People should travel here with a guide, or to ask the locals, but this is not the right way. There should be written texts everywhere, to explain the meaning of decorations and the functions of this old church, which is thought to be one of 40 oldest churches in all over the world.

After this visit we turn back a take the turn to Libohova city, a very beautiful restored city with its history. It has been inhabited since IV- III century BC, and according to the studies Libohova is 10 centuries older than Gjirokastra itself. It has been part of civilisations such as Antigonea, Adrianopolis, Melan. At Libohova we have seen the Castle (not visited because it takes some hours), the pedestrian center, the Palace of Myfit Bej Libohova, the old plane tree. 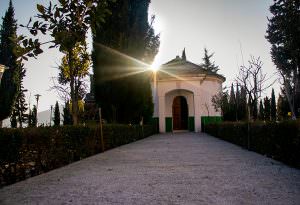 After that we continue our drive to the Mount Bureto, passing in unpaved road only for 4×4 cars. The view during all this trip is breath-taking. You see the Drino valley, the hills, lakes and villages. We passed Nepravishta villave and reached to Melan tekke, which is a religious center for Bektashi muslims, but the site has been inhabited since the ancient time. The discovery of ceramics from 4th century BC support this idea. The present tekke was erected in 1800 by Father Ali from Gjirokastra whose tomb is in the turbe in front of the Telke Structure.

We continued to beautiful church of Peshkepi, in Dropull area, with a similar architecture of Labova of the Cross, but this was built a little bit later, on 619 and has a typical byzantine style, but its initial shape changed and the actual one is a style of XI century. Our tour continued to Glina village to reach the original source of mineral water of Glina. Even though it is very important source, the place  was abandoned. 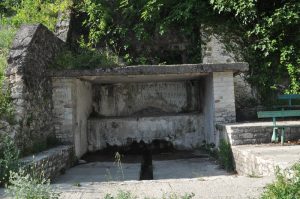 After drinking some fresh water from this source we continued to Drinos valley and passed amid green fields and the river, which has few water during the summer.  We reached the national road from Dropull to Gjirokastra. 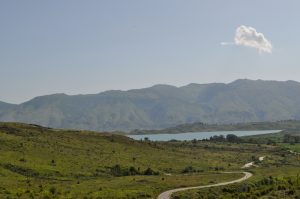 What to do in May in Gjirokastra

The food and people of Gjirokastra