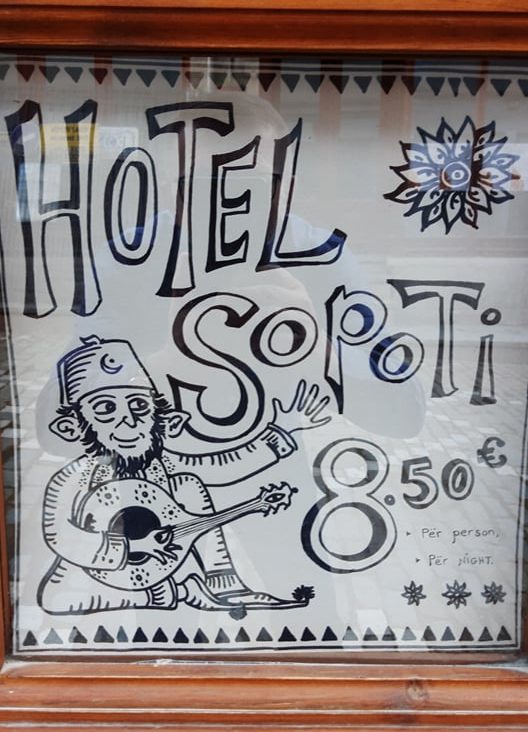 Mauro Mauri is an Italian journalist, who is in love with the city of Gjirokastra. It was very interesting to learn what are the reasons he visits so often this city, and especially the same hotel, which is not in good conditions today. Mauro is a culture and tourism journalist and comes from Briancia, a small city in the region of Lombardia, north of Italy.

He comes very often in Gjirokaster, and always choose to spend the night at the hotel Sopot, one of the oldest buildings in Cerciz Square, but once one of the most luxury hotel in all the country, with a modern architecture. But today this hotel is a neglected and ruined buildings, because the owners have not invested anymore. The hotel is now for sale. The price for a night accommodation in this hotel is 8.50 euro, or 1 000 Albanian leke, absurd price. Asked by “Visit Gjirokastra” why he choose this ruined hotel to spend the nights in Gjirokastra, he started to tell his story related to this hotel.

Regarding Viktor Emanuel III, we remember that there was an assassination attempt against him by Vasil Laci, an young Albanian men from Piqeras village. But he survived, and after Italy replaced Kingdom with Republic, his family (Savoja) went in exile and the King died later in Egypt. But there are many relatives of King Emanuel who are alive and want to remember him. That is why Mauro Mauri sleeps at the Emperor Room, in Sopoti Hotel, every time he comes in Gjirokastra.

And is not only Emanuel III who slept in this hotel, because it has been modern and famous decades ago. Other names are: former Bulgarian leader Gjergj Dimitrov, Myfit Bej Libohova, sisters of King Zog, and delegations invited by Enver Hoxha.

This hotel belong to Hajderaj family and once it has also restaurant and bar. Now the fate of this hotel is still unknown.

A local solution for a global problem: The Visit Gjirokastra Association