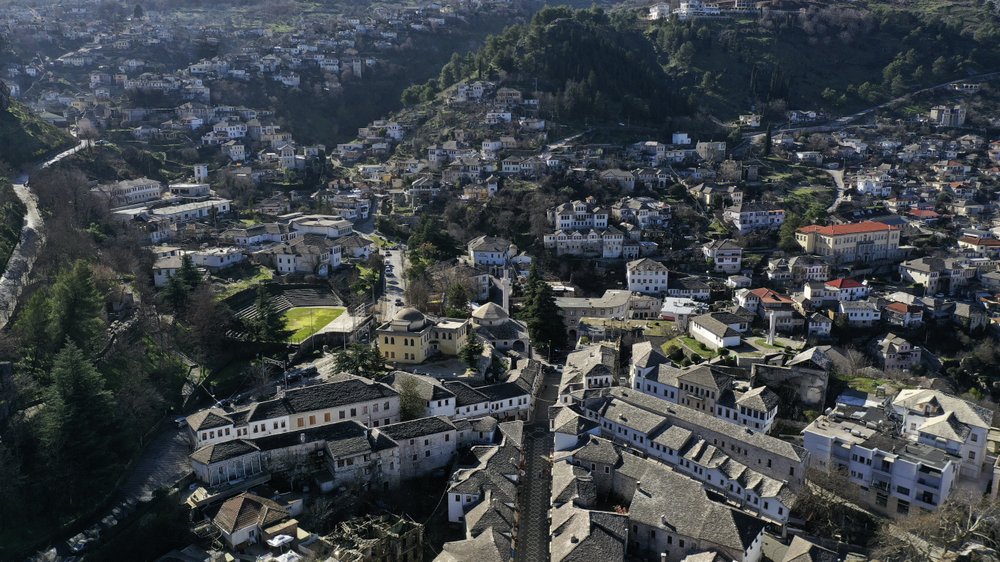 Seeing city streets in 2019 flooded by tourists enjoying its beauty was a dream come true for residents of Gjirokastra, a city in southern Albania recognized as a UNESCO World Heritage Site for its Ottoman-period architecture.

It ended precipitously when the world locked down.

Called “the city of stone” due to its two-story houses with turrets dating back to the 17th century, Gjirokastra and a second Albanian town, Berat, were inscribed as a UNESCO Heritage Site in 2005 as “rare examples of an architectural character typical of the Ottoman period.”

Following renovation of the city’s center, Hysen Kodra was among locals who turned their 200-300-year-old houses with wooden facades and stone slabs roofs into a guest lodging. After all, the 700 tourist beds in the city center could hardly accommodate the 120,000 visitors to Gjirokastra the year before the coronavirus pandemic.

“The pandemic cut it abruptly, as if with a knife,” says Kodra, whose 13-room guesthouse on top of a hill stands empty. “Until 2019 we were so good, with more and more visitors every day, and in 2020 all the booked rooms were canceled.”

The 13th-century fortress on the hilltop of the city and the radial-shaped, 17th-century Old Bazaar where tourists walk the cobblestone streets to taste dishes like pasha qofte (meatball) or oshaf (dried figs with sheep’s milk), or shop for handicrafts, curtains, carpets, traditional folk costumes and the like are the main attractions in Gjirokastra.

Tourism in Albania, one of Europe’s poorest countries, brought about 9% of GDP in 2019, and the government had hoped to raise that to 10% this year.

Kodra’s guesthouse overlooks Gjirokastra, which has a full-time population of 30,000, right at the place where a monument to Hoxha was placed after his death but removed in 1991 after the fall of the communist regime.

For a few years after Hoxha’s death in 1985, Kodra’s family was moved away to leave space for the monument. After a students’ protest toppled the communist regime in 1990 the family got its property back.

With no other industry left in the city, the government concentrated on renovation of its typical homes and streets to gear up tourism.

The turreted homes were turned into small shops, coffee bars or restaurants, and there was a four-fold increase of visitors between 2015 and 2019, most of them coming from Italy, Poland, France and Spain, with smaller numbers coming from the United States, Canada, Australia and Israel.

Since the pandemic a year ago, that kind of activity has returned to the realm of wishful thinking.

Manjola Bici, who runs a small shop in the Old Bazaar selling teas and local herbs, said there has been a 60% drop in visitors, and most of those who still come are Albanians who usually do not spend the night. Despite renewed efforts to promote the town online, revenue has drastically fallen. Many shops stay closed.

Bici and her neighbors have tried to change the variety of items they sell or lower their prices to attract domestic consumers, and have called on the government to cut business taxes to help them. She hopes vaccinations will help stop the pandemic and bring tourists back.

“You can see for yourself you are the only tourists, customers today,” she said showing the empty street to the journalists.

“I don’t think we would survive for long like this unless the government cuts all taxes, say, for a year,” adds Kodra. “We are not sure if bookings for April-May will come.”

But Loena Bakuli in charge of tourism projects at the municipality is confident of the future.

“The pandemic will go away one day soon and tourists will come back and see a different, more beautiful town,” she said.

A journey into the Kingdom of nature- Përmet