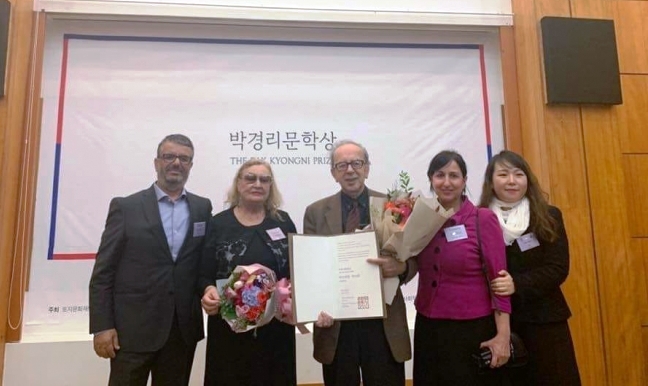 Ismail Kadare, the most famous Albanian writer, had been named this month the 26th laureate of the renowned Neustadt International Prize for Literature. Awarded in alternating years with the NSK Neustadt Prize for Children’s Literature, the Neustadt Prize recognises outstanding literary merit in literature worldwide. It is considered as Nobel prize of America. Robert Con Davis-Undiano, World Literature Today’s executive director, said that Kadare is “one of the world’s great writers and a champion of democracy and free speech.”  The Neustadt Prize is the first international literary award of its scope to originate in the United States and is one of the very few international prizes for which poets, novelists and playwrights are equally eligible. Winners are awarded 50,000 US dollars, a replica of an eagle feather cast in silver and a certificate.

This year Ismail Kadare has won another prestigious award: “Pak Kyongni for 2019, in South Korea”. Kim Uchang, the chairman of the selective commission said that “the works of Ismail Kadare make the readers think and strongly feel their relationship with certain events of history’’.   The ceremony held in October in South Korea. More than 350 writers across the world competed for this award, which was created in 2011 by the Cultural Foundation Toji , and honors every year world class writers for their contribution and impact in the field of literature. This award is accompanied by a cash prize of $100.000 (or €90.000), making it one of the richest international prizes given in the literature.

Born in Gjirokastër in 1936, Kadare is an Albanian novelist, poet, essayist and playwright who has written a large body of work. He rose to fame in Albania on the strength of his poetry and published his first novel, The General of the Dead Army, in 1963. He has won many international awards – including the inaugural Man Booker International prize in 2005 – and is often cited himself as a contender for the Nobel Prize in Literature.

It was the French translation of The General of the Dead Army, by Isuf Vrioni, published by Albin Michel in 1970, led to Kadare’s international breakthrough. The novel was not received well by the critics in Albania at the time. After that Kadare began to camouflage his novels as “novellas” and publish them as such. One of these was The Palace of Dreams, an anti-totalitarian novel written and published in the heart of a totalitarian country. Long a champion of international democracy, in 1990 Kadare went into political asylum in France. He has written, “I became familiar with literature before I knew freedom, so that it was literature that led me to liberty, not the other way around. Faith in literature and the creative process brings perfection.”

In 1992 Kadare he was awarded the Prix mondial Cino Del Duca; in 1998, the Herder Prize; in 2005, he won the inaugural Man Booker International Prize; in 2009, the Prince of Asturias Award of Arts; in 2015, the Jerusalem Prize, and in 2016, he was a Commandeur de la Légion d’Honneur recipient.

Kadare is regarded by some as one of the greatest European writers and intellectuals of the 20th century and, in addition, as a universal voice against totalitarianism.