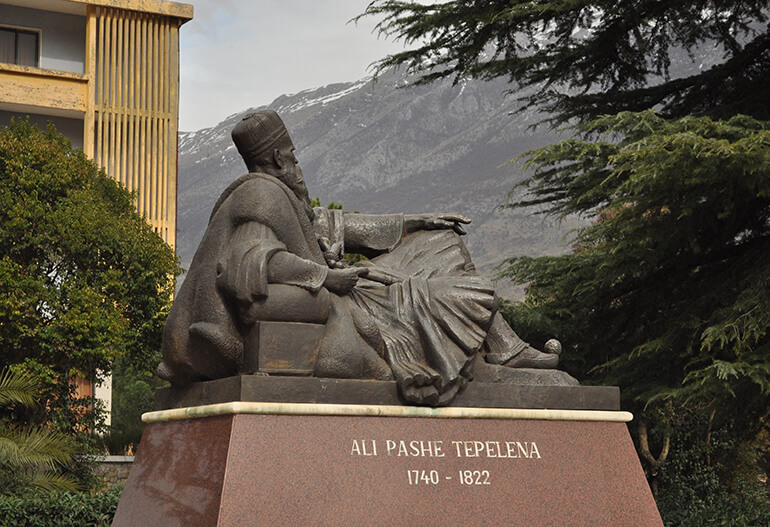 He was the ruler of Janina and Southern Albania. Born in Beçisht, near Kelcyra. His father, Veli Bey and his grandfather Muhtar Bey, had ruled in Tepelena. Ali made a name for himself in early years as a bandit, and was affiliated with Bektashi Order of Dervishes. In 1784 he managed to seize the town of Delvina with the tacit approval of Sultan, and in 1785 he was governor of Tirhala (Trikala) in Thessaly where he also served as derbenci aga, (keeper of the mountain passes).

In 1787 Ali took part in military campaigns against Austria and Rusia, thus ingratiating himself with the Porte and in the following year he seized Janina, that would become his stronghold. This move was subsequently confirmed by the sultan. Ali pasha took clever advantage of the political weakness of the porte and of political rivalries to build up an empire of his own. From Janina, using terror and brutality, he expanded his rule to take over all the southern and central Albania, and much of the Greece, and set up a quasi autonomous principality, within the Ottoman Empire. This realm had its own armed forces and navy, and he maintained diplomatic relations with England, France and Russia. He was visited among others by Lord Byron, who in a letter to his mother in 12 November 1809 recorded his meetings with the awesome tyrant. Ali’s relations with the Porte in Constantinople were tenuous, but he managed to avoid an open breach with the sultan for many years.

In 1820 when Sultan Mahmud II finally relieved him of all posts and dispatched an army under Khurshid Ahmet Pasha against him, Ali Pasha allied himself with the Greeks who were already in revolt against Ottoman rule, and fomented uprisings in the Aegean. Janina was besieged for two years and capitulated in January 1822. The Lion of Janina withdrew to a little island in Lake Janina where he was then captured and beheaded. His head was exposed for three days in Janina and was then sent back to Constantinople in a sack of honey. Ali Pasha was remembered for his cruelty and remorseless spirit of revenge, in particular towards the christian tribes of Himara and Suli. However, he was not fundamentally anti christian nor he was influenced by European enlightenment. His court in Janina was abuzz with European diplomats and officers, Greek physicians, poets and dervishes. His prime goal was an autonomous Albania and Epirus, but in the final analysis, his struggle with the Porte, more than anything, assisted the cause of Greek Independence. At any rate, Ali Pasha was regarded in later Albanian historiography as a positive nationalist figure.

The ritual of sheep migration in Gjirokastra, a ancient tradition

The story of the famous Mashkullora battle